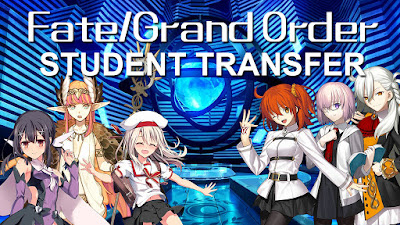 I'm sorry it took 9 months since the last update! The release got so delayed QAQ
Sorry... there was a few issues and that has now been amended and corrections has been added

So as some of you know... this Blog is generally focused around Body Swap captions and part of those captions were Anime ones... which don't worry... I do intend to continue... at some point... soon... hopefully.

And well... to tell you the truth... I had always wants to introduce a Fate Body Swap Caption as well, using maybe Prisma Illya, but that idea never took off and the draft still sits in my caption folder.

Then I discovered Student Transfer (Game can be found here: Student Transfer) and then it dawned on me, that maybe... I could write a Body Swap story through a game and more importantly... a Fate Story and thus Fate/Grand Order was born.

The Student Transfer Route... the Body Thief Story I will continue to flesh out once I managed to wrap my head around my own story... but for the Fate Route the beginning in the same.

Patch Note: 3.1 includes a Swap Class ending for one of the early routes. Orleans is proving to be a pain to write as the story was a lot longer than anticipated + trying to find free time to complete it!

Note: Another friendly reminder, PLEASE NOTE that the Fate/Grand Order Characters are NOT free for use. You are free to use the characters within the Character pack, but please remember to credit.

Please also remember to drop a comment and provide some feedback

Also I would appreciate it, if you guys would watch the Opening and the Ending that is inserted into the route. Please also brace yourself, the story should last around 2 hours worth of reading/game play.

You can skip the additional scenes, but for the full experience please go through it all and let me know what you all thought of it.

How to Get onto the Fate Route:
Once you hit the Day 1, School Entrance Scene. Please select the End of the World option and progress onto the Fate Route. This route is linear with a few side stories that branches back into the story. Please avoid skipping the story and try to play through it normally.
(It will reduce errors)

How to Install:
1: Download and unzip the game.
2: Delete the existing Body Theft Scenario (If it is already installed)
3. Unzip or Copy, Body Thief to scenario folder of the 4.5 version of Student Transfer and make sure the folder is named or renamed to Body Theft
4: Copy, Paste and Replace the new one into Scenario Folder (For Patch Updates)
5: MAKE SURE THE FOLDER IS NAMED Body Theft

Patch Note and Fixes
3.0 Updates (Compatibility update)
- Expansion to the Student Transfer side of the Story of Body Thief
- Added new Characters, Music, BG, SFX, Assets, Movies and expanded the Story
(I wrote over 3200 lines with roughly 26,500 words/175,000 characters... so please don't just rip my content, I will honestly cry...)
- New Fate Route covering the Fuyuki Arc
(That's right... I already drafted Orlean's... there will be more in the future!)
- Significantly reduce file size!

3.1 Updates (Minor Update)
- Fixed the issue where there was an extra scenario folder in the folder itself
-Added new characters to the KS Character pack
(Alice, Cornelia, Hestia, Katrina (might get replaced), Natsumi with new uniform, Shion and Tara from Never)
- ST Only edition has been uploaded with Character pack included
- Swap Class Ending added to one of the early options of the game

Additional Comment: I have created a new cast of characters which will be introduce into the Student Transfer later on. There will be a lot more 'Powers' and will feature a variety of characters with ability... and TIME TRAVEL!!!

Credit and Special Thanks:
To CobaltCore for fixing a bunch of stuff for me and helping me with the guide
To AppleMelon as I learnt a lot from his scenario and script
To Narg for pointing out issues and errors with my scenario
To sinwave93 for the ARAP pack and the Katrina Sprites
To C.r.e.a.m for the Tara Sprite
To my fans who have shown interest in the scenario <3

Disclaimer: Please note that I do not own the rights to any of the Fate materials. Considering the amount of time I have put into ripping and creating the materials, I would deeply appreciate it if people didn't just use it's content without permission. You can create your own Fate Material, but please don't forget to support the official release and please be respectful.